For eight-year-old Candelaria Cabrera (Cande), nothing beats dribbling a soccer ball downfield and taking a shot on goal. (Aside from making that goal, of course.) But an outdated rule in Argentina, where she lives, stating that girls couldn’t play football on the same team as boys once they turned eight, threatened to kick her off the field—and out of the sport she loves—for good. Thankfully, her mom reached out far and wide for help, and Nike responded. Big time. Now, not only is Cande, as she’s known by friends and family, back in the game, but she’s also opened the door for so many other young girls just like her in Latin America and all over the world.

Cande’s parents remember first seeing their daughter happily kicking a ball around when she was about three years old. They tried to encourage her to play sports, like hockey, that were more common for girls in their area, but Cande was drawn to football like nothing else. There were no girls’ teams in her town of Chabas, in the Santa Fe province (which also happens to be the birthplace of stars like Lionel Messi and Jorge Valdano), so eventually they signed her up to play in the local boys’ league, Club Huracan. She fit right in with her teammates and thrived in the left wing position.

“We are building a better future, for girls like you. A future where no one is telling you what to do. One where you won’t have anyone trying to limit you, pushing you back. One where you’ll be valued for your game and what you bring to it. So, put on your boots. Go at it every day. Play. Because you have big games ahead, and your possibilities are unlimited. And, remember, to the ones saying you can’t do it, just don’t listen.”
Ruth Bravo, captain of the Argentina Women’s National Football Team.
A Birthday Present

Just months before turning eight, Cande was notified that, due to her league’s rule against mixed-gender teams, she wouldn’t be able to continue playing with her team after her birthday. Her mom, Rosana Noriega, shared her daughter’s sad story on social media. The Nike team in Buenos Aires spotted it, and then reached out to see how they could help. With assistance from some players on the Argentina Women’s National Football Team, they launched a campaign called “Nosotras Con Cande” (“We’re with Cande”) to try and convince the league to change their rules and give girls the right to play. That December, Club Huracan voted unanimously to do just that. With the new ruling, Cande will be able to play with the boys until she’s 10, and the league promised to create a girls’ league within two years so she’ll still be able to compete at a competitive level after that.

“We know how much Argentineans love sport. When we saw a young girl not allowed to play the game she loves because of her gender, we had to act. It was eye-opening to learn that that every single one of our professional athletes has had to face the same hurdles that Cande is facing.”
Nic Esparza, Senior Brand Marketing Director of Nike’s Southern Cone (SOCO) region in South America. 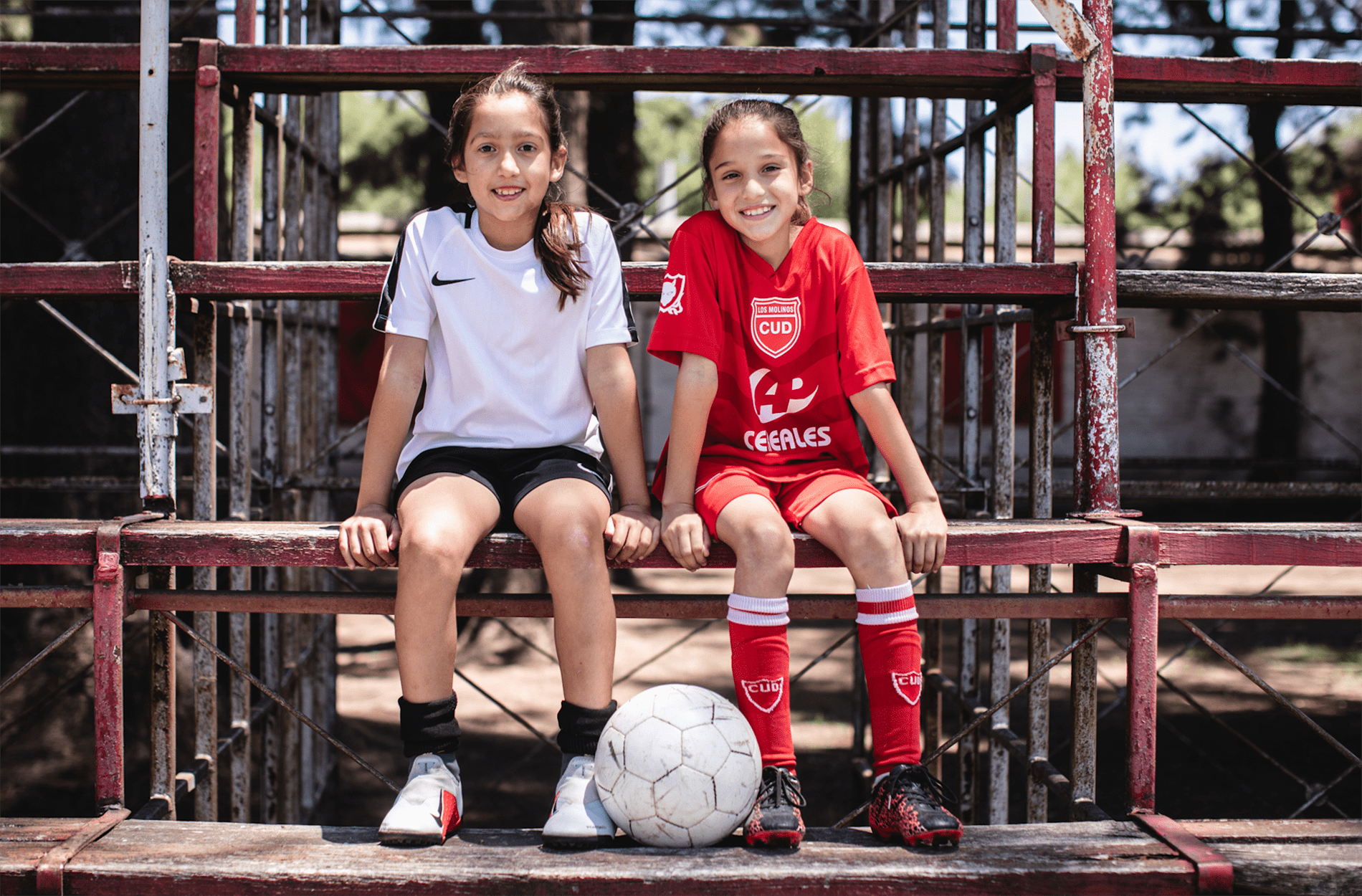 To celebrate this historic win in the fight for gender equity in sport, the Nike SOCO Football team travelled to Chabás and held a clinic for Cande and about 70 other young female footballers, led by Evelina Cabrera, President of the Argentina Women’s National Football Association, and six of the professional players who took part in the “Nosotras Con Cande” campaign.

We know that sport has the power to move the world forward. And stories like Cande’s are unfortunately all too common. In Argentina, for example, only 68 of the 230 regional leagues recognized by the Argentine Football Association have women’s teams. But Nike is working tirelessly with its partners across the globe to try and help bridge these culturally driven gender gaps in sport and play. In 2018, we teamed up with La Nuestra, the first all-girls football program in Buenos Aires, to provide coaching and equipment support. And in 2019, there was yet another victory: Argentina’s Boca Juniors women’s soccer team played a match in the legendary La Bombonera stadium—a first for any women’s team. The moment was captured on Instagram, and it quickly became Nike Argentina’s most-liked post ever: 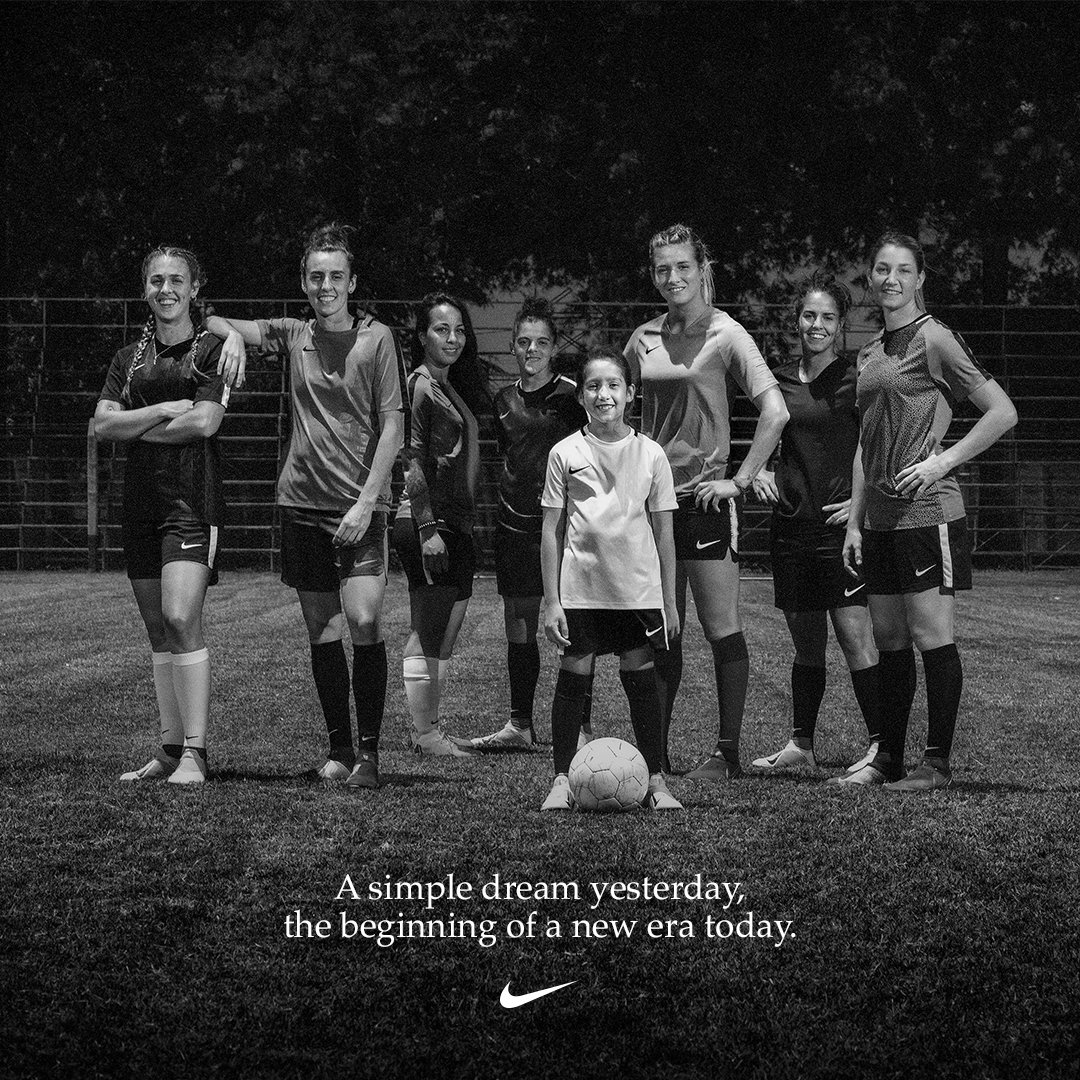 @ Nikefootball: This is not just a team playing in La Bombonera. It is a nation seeing what’s possible. Today, the @bocajrsoficial women’s team is playing in Argentina’s greatest stadium for the first time in history, breaking yet another barrier for women in football. It’s only crazy until you do it. #JustDoIt

Standing Up for Equality

We believe in the power of sport to unite and inspire people to take action in their communities. We are committed to fostering an inclusive culture at Nike and to breaking down barriers for all athletes.

Inspiring the Next Generation of Female Athletes

Nike is addressing barriers to girls’ participation in sport through new community partnerships and access to products to help girls play with confidence.

We believe in the power of sport to unite and inspire people to take action in their communities. We work with grassroots organizations, partners and employees around the world to advance equality, level the playing field for all and make play and sport more approachable and accessible for kids. Because we know that active kids do better — in school, in their communities and in their future careers. And while all kids are made to play, not every kid gets the opportunity.